Castello Svevo - The Castle of Bari 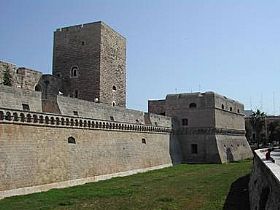 The principle landmark of the historic center of Bari is the imposing seaside castle. Fronting the Adriatric Sea, it backs to the defensive walls that once protected the old city center. Originally the site of a Roman stronghold, the location was utilized by the Byzantines to build a more "modern" and imposing fortress as part of their overall system of coastal fortifications. It was destroyed in 1156 by the King of Sicily but rebuilt by the Holy Roman Emperor, Frederick II, who loved Puglia and left a legacy of castles all over the area. The Castello Svevo was eventually added onto and redecorated by the Aragons to achieve the look it has today, complete with bastions, ramparts, a moat, drawbridge and squat towers.

The castle hosts a small museum and changing special exhibits. It's seaside location and impressive size give it a looming and characteristic presence in the historic quarter near the city's busy port.

The Castello Svevo is open daily from 8:30 am until 7:30 pm. Closed Wednesdays.

Haven't visited yet? Have questions about Castello Svevo - The Castle of Bari? Ask them here!