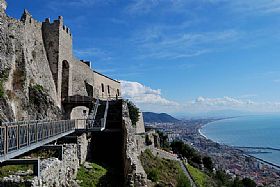 The hilltop castle above Salerno dominates the modern city below as a historic reminder of the past. It overlooks the Mediterranean with views stretching towards the famed Amalfi Coast. Resting nearly 300 meters above sea level, the remains of the stronghold that protected the city are a pretty backdrop to the hillside landscape.

Built originally in the Byzantine era, it was taken over by the Longobard Duke of Benevento, Arechi II, in the 8th century, giving the castle its name. It was passed to the Normans and then the Aragons. The towers that once served as look-out posts were connected by a thick encircling wall. It fell into disrepair after the Unification of Italy, then passed to the Province of Salerno, which started a long, slow restoration process. A stamp in honor of the castle was released by the Italian Postal System in 1992. The castle, apart from offering fabulous views, is surrounded by nature trails and native landscape.

The museum in the castle contains a collection of ceramics, coins, and arms, along with a salon for special exhibits and events.

Haven't visited yet? Have questions about Castello di Arechi? Ask them here!

Enjoy the comfort of a home rental in Salerno.