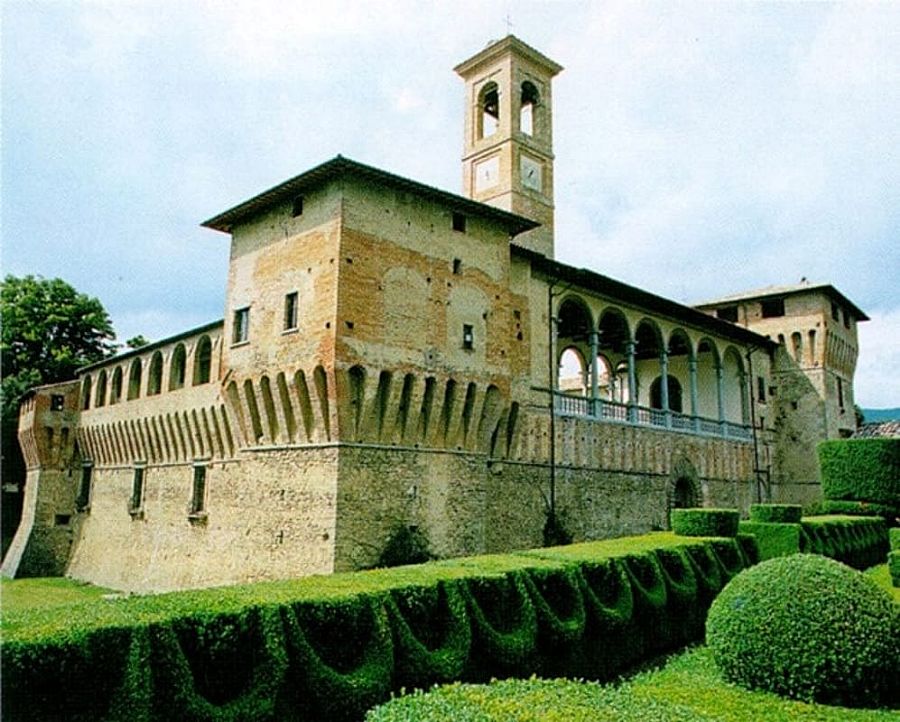 In San Giustino, the imposing Bufalini Castle is quite an impressive sight, one of the rare castles that is still perfectly preserved. Built in the 15th century as a military fortress, it was a strategic structure and border post at the boundary between the Papal States and the Florentine Republic. It was held by Dotti family of Sansepolcro, who sided with the Ghibellines (Papal States). The fortress was sacked and burned, and eventually transferred to the Bufalini family around 1492. They enlarged it, adding the four corner towers and battlements.

The next generation began to transform it into a patrician palazzo, starting in 1530. Renaissance-style loggias, porticoes and decorations were added, and the interior was embellished with frescoes. The Mannerist artist Cristofano Gherardi created allegorical and mythological scenes in the salons. Through the next decades, the fortress was transformed into a regal residence and the farm became an Italianate garden. An underground channel brought water from the Vertola River to irrigate the ornate park, with its fruits, flowers, fountains and a labyrinth. The works were completed around 1560. The later Baroque frescoes were commissioned in honor of the marriage of Filippo I Bufalini to Anna Maria di Sorbello.

The castle was ceded to the state and is administered by the Ministry of Cultural Heritage as a museum. It is a rare example of a castle/palace that has been perfectly preserved in all its aspects through the centuries.

Haven't visited yet? Have questions about Castello Bufalini? Ask them here!