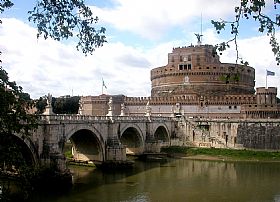 The great round castle known as Castel Sant'Angelo wasn't built as a royal residence at all, but as a massive mausoleum. The construction was undertaken in 123 AD by Emperor Hadrian as his worthy final resting place. The enormous structure featured a spiral internal ramp that horses could climb to transport the earthly remains of emperors and their families into the tomb for burial.

Sitting in a prominent spot along the Tiber River, it didn't remain merely a mausoleum for long. Emperor Aurelius added watch towers and crenellated walls so it could be used as a defensive structure, taking advantage of its strategic point to help ward off attacks. It provided shelter in times of peril, and then became a papal residence. A secret passageway along the walls of the Vatican City led to the castle, for popes and their subordinates; the papal treasury was held in the center of castle for years, a secure spot like Fort Knox, and stockpiles of food and weapons were kept here for seiges. The Castel Sant'Angelo also served as a secure prison for some time.

It now houses the National Museum, with exhibits of history, pottery, weaponry and paintings. But the main attraction is the upper rampart terrace, which provides stunning views of Rome from its lofty position. A romantic and panoramic spot!

The castle gets its name from the legend that the Archangel Michael appeared wielding his sword and fixed himself on top to protect Rome from the plague. But the statue-studded bridge leading to it is also called Ponte Sant'Angelo, and the beautiful scuptures were designed by Bernini.

Haven't visited yet? Have questions about Castel Sant'Angelo? Ask them here!