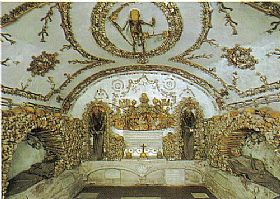 On the celebrated Via Veneto is a church whose crypt has garnered more attention than the paintings inside the church itself. That's because a group of Capuchin monks with too much time on their hands decided to decorate the eternal resting place below the chapel using the bones of their dearly departed brethren as their artistic medium.

The church of Santa Maria della Concezione was built by the Barberini pope Urban VIII, whose brother Antonio was a capuchin friar. The crypt was created to bring together the remains of generations of monks, some of which were exhumed from another friary and buried here. At some point in time the monks decided it would be a good idea to spruce up the place and took on a "crypt improvement project" by arranging the various bones in an artistic manner throughout the six rooms of the underground chamber. They created columns, arches, floral designs and hearts - all from leg bones, skulls, pelvises, and the like. It's very imaginative, though perhaps a little spooky. The macabre crypt attracts thousands of visitors a year to see the embellished burial chambers.

The Church of Santa Maria della Concezione is a simple Romanesque style structure but Guido Reni's vibrant rendering of St. Michael the Arcangel, along with paintings by Lanfranco, Pietro da Cortona and others, that usually get overlooked for the underground attraction.

Haven't visited yet? Have questions about Capuchin Crypt? Ask them here!