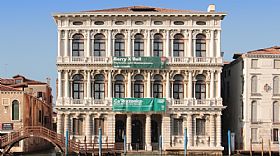 A glorious palace on the Grand Canal that once hosted opulent galas is now home to the Museum of 18th Century Venice. The palazzo itself is worth a visit to see the marble-clad, gilded and frescoed salons. A sweeping staircase and wall of windows overlooking the waterway of the Grand Canal make you feel like nobility. Wander the halls and rooms under allegorical frescoes and you'll feel transported to the 18th century and wish you had a gown!

The palace was designed by Venice's noted architect, Baldassare Longhena for the aristocratic Bon family, but he along with his patron both died in 1682 and work halted until the Rezzonico's, a family of Lombard merchants and bankers, bought themselves a title and the palazzo in 1751. They brought in Giorgio Massari to finish it, then called in painters to adorn it with splendor. The family faded out and the palace was eventually purchased by Robert Barrett Browning, whose famous writer father died here in 1889.

The building is exquisite and the views are spectacular. The paintings, sculptures, frescoes, tapestries and furnishings contained within its walls are a homage to the art and life of 18th century Venice.

Haven't visited yet? Have questions about Ca Rezzonico? Ask them here!

Rent a holiday house in Venice and Veneto and travel like a local.