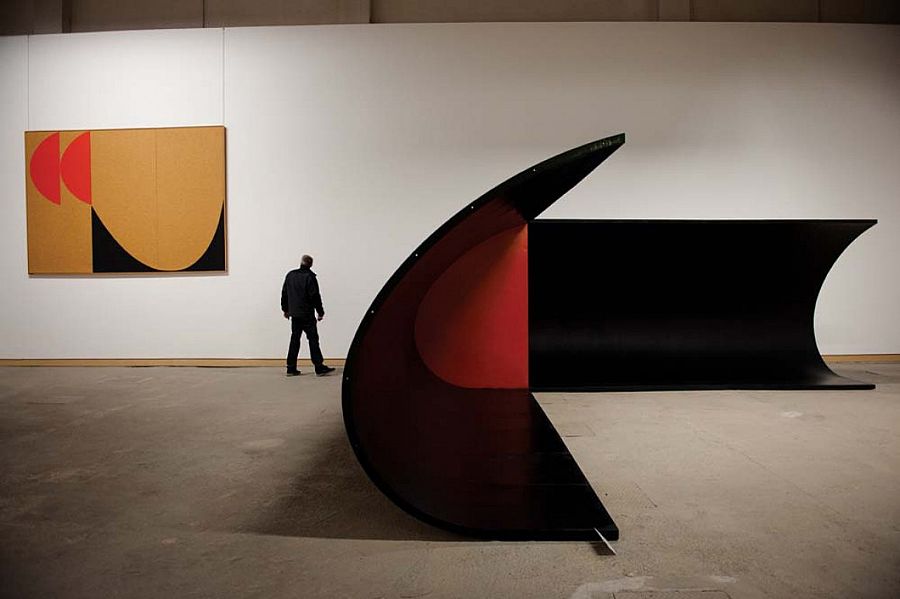 Alberto Burri's extensive collection of contemporary art spreads across two spacious facilities in Citta' di Castello. The artist enriched his hometown with his proflic works and has been a huge influence in the spread of contemporary art in Umbria and southern Tuscany.

Alberto Burri was born in Citta' di Castello in 1915 and became a medical doctor. He was drafted into the military during WWII and was deployed with the Italian troops in Libya. He was captured in Tunisia by Allied forces and sent to a POW camp in Texas. It was there that he took up painting, and never practiced medicine again. Upon his return to Italy following the war, he dedicated himself to art, moving beyond the methods and mediums of the day to create new contemporary works with unorthodox pigments and materials. His works quickly garnered acclaim and were exhibited around Europe and the US. Burri produced multi-material modern works, with avant gard uses of things like burlap and linens to create "sculptural canvases". The Guggenheim states that he "blurred the boundaries between painting and relief sculpture".

In the 1950s he took up the use of industrial materials and created welded reliefs and grand sculptural public installations. His definitive Grande Cretto is a massive cement creation built over the ruins of Gibellina Sicily, one of the largest land works ever created. He constructed monumental sculptures in metal and "play sculptures" in wood. Burri passed away in 1995.

The extensive collection of more than 200 works is spread over two grand facilities in Citta della Pieve - the Palazzo Albizzini in the historic center, and the Ex-Seccatoi di Tabacco on the outskirts of town.

The Palazzo Albizzini is a 15th century Renaissance palace that was restored in 1981 and given to the Burri Foundation for free use for 99 years. The collection occupies three floors covering 1660 square meters (nearly 18,000 square feet), his vibrant contemporary works a contrast to the sober architectural style of the palazzo.

The Ex-Seccatoi di Tabacco is an industrial facility on the edge of town once used for the drying of tobacco leaves, a major crop in the area. It had the distinction of being used as a warehouse for the books and registries of the Florence library and courthouse following the flood of 1966, to dry and preserve them until they could be restored. It was renovated and turned into the modern art facility for more monumental works of Burri's in 1990, and is an interesting example of industrial reclamation for art.

The Palazzo Albizzini is located at Via Albizzini 1 in the center of Citta di Castello. The Ex-Seccatoi di Tabacco is at Via Francesco Pierucci.

Haven't visited yet? Have questions about Burri Collection? Ask them here!

Rent a holiday home in Città di Castello and travel like a local.