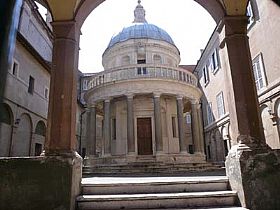 Tucked away on the Janiculum Hill is a lovely yet largely overlooked treasure. The perfectly-proportioned temple by Bramante is encased within the cloister of the Church of San Pietro in Montorio, like a jewel sitting within its box; you just have to look inside to see the dazzling effect.

Located on the Trastevere side of the river, the beautiful tempietto was commissioned by the Spanish royal couple, Ferdinand and Isabella, in 1502. It is built to commemorate the site where it is believed St. Peter was crucified. An earlier church sat on this site in the 9th century. The buildings that surround the cloister are now home to the Spanish Academy.

Donato Bramante was chosen by Cardinal Della Rovere (who became Pope Julius II) as architect for the project. His small and classical design with perfect symmetry and a ribbed dome brought the beginning of the High Renaissance to Rome. The graceful chapel was so well received and lauded that it won Bramante the commission to design the Basilica of St. Peter's at the Vatican.

Inside, there are Renaissance frescoes by Vasari, and an amazing relief sculpture of St. Francis in Ecstasy. Originally, Raphael's Transfiguration, which is now in the Vatican Museum, hung over the high altar, and Reni's Crucifixion of Peter, also in the Vatican, was painted for this chapel, as well. A copy hangs where the original once was.

The Tempietto brings a smile to the face; walk into the cloistered courtyard and see that gem sitting there like a domed music box and you'll have a feeling of quiet joy at the sight. It's a lovely site on the hill, well worth the walk to gaze at it.

Haven't visited yet? Have questions about Bramante's Tempietto? Ask them here!