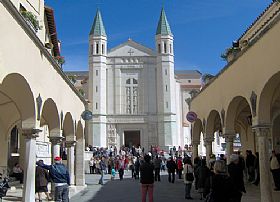 Cascia is situated in the green hills of Umbria, and is well known for its association with Santa Rita, one of the Church’s most dynamic Saints. Known as the "Saint of the Impossible", St Rita was blessed with the Stigmata of Christ in the final years of her life. Rita had a hard and difficult life. She lived through just about all states of life any Christian woman can experience – from girlhood, through married life and widowhood, to the Religious Life of an enclosed Augustinian nun.

The works for the Basilica of St Rita and the chapel where the Saint’s incorrupt body lies, started in 1937 and only ten years later the church was consecrated.

The holy building's current look is due to the will of Pope Pio XII and Monsignor Spirito Chiapetta, as well as the architects Martinenghi and Calori. The basilica (covered with typical white travertine from Tivoli) is a Greek cross church with four arms having the same length and a central cupola dominating the presbytery. The artist Eros Pellini sculpted some episodes of the Saint's life on the front portal and inside the church, on Carrara marble, the Stations of the Cross. Some popular modern artists have taken part to the realization of the monument. The walls have been painted by Luigi Montanarini, Luigi Filocamo, Silvio Consadori and Gisberto Ceracchini; the holy furnishings and high altar were made by Giacomo Manzù. Cesarino Vincenzi di Bologna is the author of the oil painting dedicated to the Madeleine, the fresco representing St Giuseppe at the entrance of the basilica, the lovely ceiling and wall painting of the sacristy.

Umbria is a region that has given many popular saints to the Church, including Francis and Clare of Assisi, as well as Rita of Cascia. Itwas a region of poverty, earthquakes and natural disasters it was also prone to constant violence and civil unrest where the law of the vendetta, or family vengeance, was ever-powerful.

Rita was born about 1377 in the village of Roccaporena, near Cascia, a significant city in the mountainous area of Umbria in central Italy. Her elderly parents, Antonio and Amata Lotti, christened their only child Margherita, Rita in its familiar form. As was normal at the time, Rita’s parents arranged her marriage to a young man. Rita was a dutiful and loving wife, though the accounts of her saintly forbearance and patience with a wild and cruel husband may have grown in the telling without much historical evidence. Anyway her exemplar behaviour persuaded her husband to the Christian conversion. Nonetheless and probably as a result of his job as a city watchman, one evening, as he returned to his family in Roccaporena, he was stabbed and killed. She worried particularly for her sons and both their physical and moral well-being. She prayed and worked for reconciliation between the sworn enemies. Tragedy struck again, and a strange answer to her prayers. Her two sons died while still in their teens, possibly from one of the many plagues or epidemics so common at the time.

Gradually, a new hope came into Rita’s life. Whether or not she had wished to become a nun as a young girl she now felt strongly called to the life of an Augustinian nun in the convent in Cascia. She would find peace, security and rest in that convent. In 1442, one day, she felt a thorn from Christ’s crown of thorns wound her own forehead and this was to leave her with a painful stigma for the last fifteen years of her life.

She died in 1447 and, even though she's venerated since the last years of her life, she was beatified only in 1628, thanks to Pope Urbano VIII and sanctified in 1900, by Pope Leone XIII.

Haven't visited yet? Have questions about Basilica of Santa Rita da Cascia? Ask them here!

Rent a holiday house in Umbria and travel like a local.