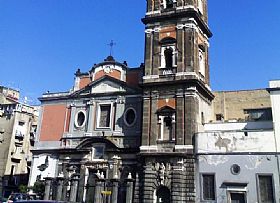 The distinctive church of Santa Maria del Carmine is a landmark in the center of Naples' bustling downtown. It was built in the 1300s and has taken on a decidedly local version of baroque style. It has an Eastern-type bell tower with an onion-shaped dome, which is appropriate since the church was originally founded by monks from Palestine. They came to Napoli to escape Saracen persecution, bringing with them an image of the Madonna from Mount Carmel, which gave the congregation its name. The Byzantine painting of a dark-skinned Mary with the baby Jesus holds a place of honor in the basilica.

Located just off Piazza Mercato, one of Naple's great public gathering spots, the church has a gorgeous cloister garden which is flanked by richly-decorated colonnades. The vaulted arches hold a riot of fancy frescoes. The garden is carefully tended and peaceful, befitting the Carmelite community that still lives here. Inside, the church itself is fantastically adorned with frecoes, sculptures and maijolica mosaics.

The church holds the annual Festa del Carmine every May 30 in celebration of the patron saint, starting with a solemn procession of the icon through the streets of the neighborhood, which turns into a party in the piazza where everyone is welcome. The festa culminates with an elaborate display of fireworks that sets flame to the bell tower with dramatic sparklers and "fire" rising from the peak, a pyrotechnic display that highlights the Neapolitan skill at fireworks and drama.

Haven't visited yet? Have questions about Basilica of Santa Maria del Carmine Maggiore? Ask them here!

Enjoy the comfort of a home rental in Naples.