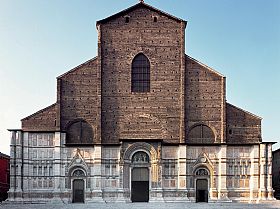 The enormous Gothic Cathedral of San Petronio dominates Bologna's Piazza Maggiore. It has soaring high vaults and an enormous interior space. Construction began in 1390 and continued for many years, finally being dedicated more than 150 years later. The plans gained grandeur and at one point was destined to be bigger than St. Peter's but the Pope put the breaks on those plans, literally blocking it by starting construction on the Archiginnasio on neighboring space. It was also stalled for years by lack of funds and technical difficulties with the towering vaults. The facade remains unfinished to this day.

The decorative portals are embellished with relief sculptures of Old Testament scenes by Jacopo della Quercia. There are numerous chapels adorned with paintings and sculptures, and the stained glass garners a lot of attention. But a fresco draws the most controversy. A scene on the wall taken from Dante's Inferno has marked the cathedral with attempted terrorist attacks as the fresco is seen as insulting to Islam.

The bell tower had a unique ringing cycle which inspired the other churches in the city to follow it, a system still used today.

Haven't visited yet? Have questions about Basilica of San Petronio? Ask them here!

Have a look at our holiday homes in Emilia Romagna.