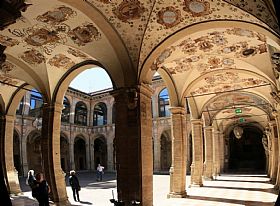 One of Bologna's most famous buildings, the Archiginnasio served as the principle building for the university. It was built in a rush, ordered by Pope Pius IV as a means of blocking ambitious plans to make the cathedral on Piazza Maggiore bigger than St. Peter's Basilica. He commissioned the palazzo of higher learning with architect Antonio Morandi, and it was erected in just a couple of years. It was dedicated in 1563 and served as the main seat of the university until 1803 when it was given over to the Institute of the Sciences. In 1838 a portion of the building was redesigned to be a library and still houses the important biblioteca, the largest in Emilia Romagna, with a huge collection of historical, philosophical, literary, and biographical texts.

The impressive palazzo is outlined the trademark arcades of Bologna on the lower level and an interior courtyard. The upper level housed study salons for both the law students and art students, separated in different sections. The facade bears thousands of inscriptions by students about their professors. The most famous room is the Anatomical Theater, which opened in 1637 for medical studies. The ornate wood-lined room is a circular theater with a pulpit from which professors lectured. It is flanked by carvings of "skinned" statues. Other sculptures represent famous doctors from different eras. In the middle is a dissection table, used for visual display during lectures.

Haven't visited yet? Have questions about Archiginnasio? Ask them here!