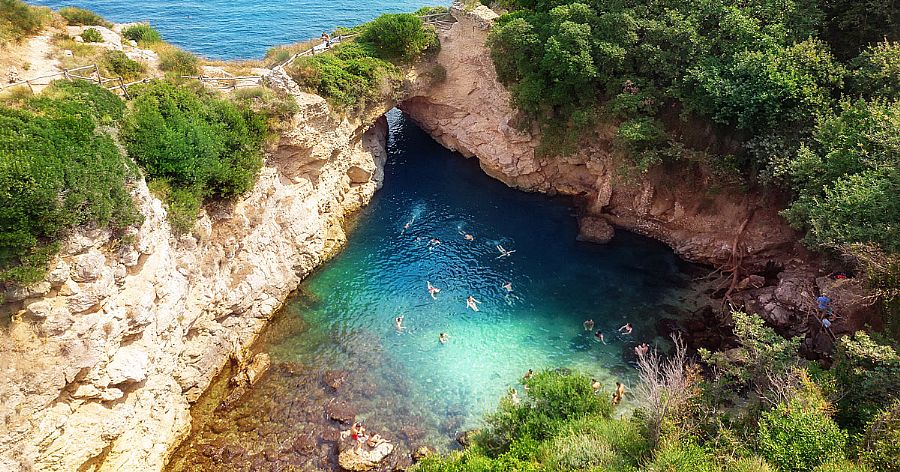 This isn't a beach in the traditional sense, but a hidden natural swimming pool, natural arch, and archeology site on the Cape of Sorrento. It's a beautiful and romantic swimming hole, surmounted by a rock arch. Ruins of a sprawling Roman villa still stand on the rock and can be visited -Villa Pollio Felice was from the 1st century BC. So, this spot has been in vogue as an exclusive getaway for more than two millennia! It is named for Queen Giovanna d'Angio of the Kingdom of Naples who loved the spot and is said to have visited often between 1371-1435, scandalously spending hours in the water with her various lovers, according to the legends.

To reach the Bagni you'll need to arrive at the Capo di Sorrento and then walk along a footpath for about 20 minutes, with the air mingling the scents from the sea and the Mediterranean brush. A staircase leads down to the pool. It is shallow and romantic for a swim. Walk all the way to the point of the Cape to find the Roman villa ruins, along with sweeping views of the Gulf and the Sorrentine peninsula. Follow the path further along towards the bouldering wall and another set of stairs leads down to a cove with sea swimming (deeper than the Bagni).

Bring water shoes for this outing, to help walking on the rocks!

Haven't visited yet? Have questions about Bagni della Regina Giovanna? Ask them here!

Enjoy the comfort of a home rental in Sorrento.