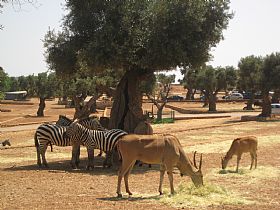 Just a short drive from the towns of the Valle d'Itria, you'll find a complex of amusement parks to entertain the whole family. When the kids have had their fill of art and history, a day at the zoo is a great idea! Zoo Safari is a vast park that offers several paths to see a wide variety of animals.

Zoo Safari is actually three parks in one: the animal kingdom, the sea lion aquarium, and the amusement park called Fasanolandia.

Zoo/Safari. First up is the main focus, the drive-through safari landscape where you'll see lions, giraffes, tigers, elephants, zebras, antelope and more roaming the range. This is the delight of kids, as some of them will come up toward the car and they can see them up-close! The Zoo offers a little train and walking paths among the animals' enclosures, with bears, rhinos, hippos, monkeys among the residents. There are exotic birds, as well.

Sea Lion Aquarium. Here is a theater and pool where trained sea lions put on a show, the intelligent marine mammals showing off for the crowd.

Fasanolandia. An amusement park with roller coasters, rides and games, this is a place for kids to let off steam and enjoy a few thrills. Among the rides are hilly and curvy coasters, a Ferris wheel, bumper cars, water rides, a monster truck rally ride, and a haunted castle. There are rides for littler kids, and a 4D cinema, too.

Zoo Safari is open from March through October (weekends only in March and October; daily from April through September.) Ticket costs depend on which parks and attractions you're attending. See their website for more information.

Haven't visited yet? Have questions about Zoo Safari? Ask them here!

Rent a holiday house in Fasano and travel like a local.