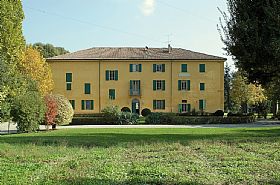 The sunny yellow Renaissance villa and sprawling park known as Villa Griffone is the home of the Marconi Museum. The villa was built in the 1600s but purchased in the mid-1800s by Guiglelmo Marconi's parents, and the scientist spent his formative years here, and he set up a laboratory in the attic. He returned frequently throughout his life, and his son Giulio was born in the villa in 1910.

It was in the villa that Marconi, most famous as the inventor of the radio (or "wireless") transmitted his first radio signal in 1895. The home was damaged in bombing during WWII but was restored.

The Marconi Foundation was started in 1937, just a year after the scientist's death, and a museum established to honor his contributions and as a scientific home for experiments and study by the University of Bologna. The Museum is visitable by advance reservations and with a guided tour only.

Exhibits include displays relevant to Marconi's life and inventions, including radio telegraphic devices of WWI and WWII. There is a documentary about radio communications and a section dedicated to broadcasting. Tours include a visit to the silkworm room, the park, and the mausoleum.

Haven't visited yet? Have questions about Villa Griffone? Ask them here!