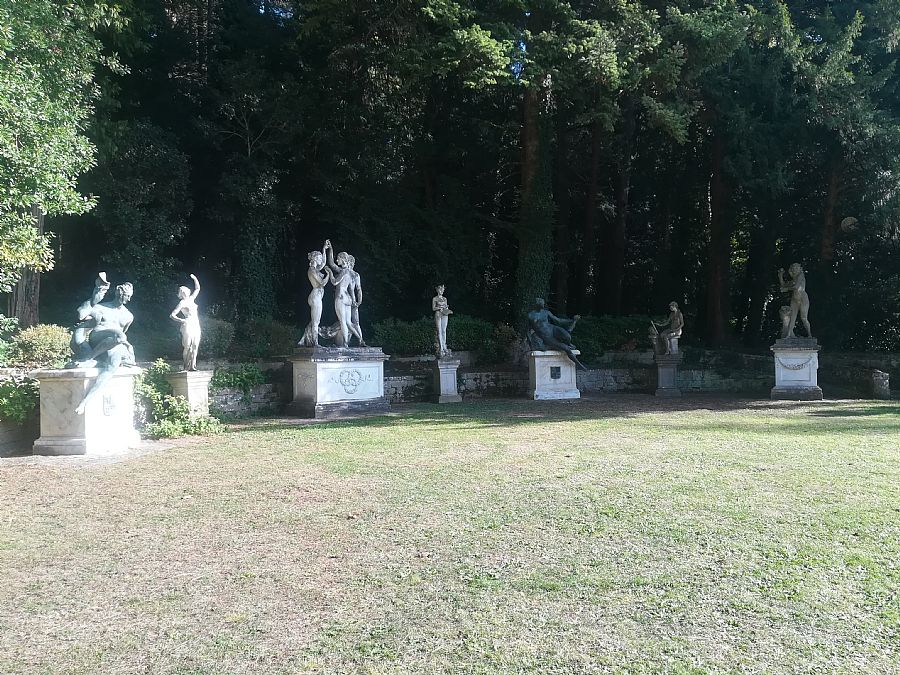 Not far from Salerno sits a magical garden hidden away in a gated estate, that even most Italians don’t know about. The Villa d’Ayala at Valva, about 50 kilometers from Salerno, holds a 42-acre walled park that is full of surprises. The historical gardens contain themed sections, romantic corners, bubbling fountains, tree-lined lanes, boxed hedges, fanciful statuary galore, and a grotto guarded by dragons.

It unfolds in a lovely sequence, combining woods with manicured zones. The statues are exquisite -from the Four Seasons carved by Antonio Pagano to The Muses, by Florentine sculptor Donatello Gabrieli, arranged around a concert lawn.

Another highlight is the theater, called a teatro di verzura, meaning the various elements are made up of plants and hedges. Popular in Italian gardens of the 18th century, this one includes sculpted spectators, whose eyes don’t look to the stage in front of them but instead to the nature surrounding them.

The tour culminates at the castle, a stone crenellated villa that belonged to the Marquise of Valva, with a stately effect, except for the deep cracks that scar the façade. Valva was at the epicenter of a destructive earthquake in 1980 and the villa has never been fully repaired. When the last marquis, Giuseppe Maria Valva, died in 1959, he bequeathed the estate to the Sovereign Military Order of Malta, and they have, unfortunately, not invested to restore this captivating, crumbling castle.

The gardens and fountains are maintained, though, and you can reserve a tour to wander among their glories. It’s worth your while and your detour; the park with its stunning statues and many surprises is all the more fascinating for its obscurity.

Valva is located near the spa town of Contursi Terme, where you can soak in hot mineral-rich water to soothe away the aches and pains from traveling. It’s also where you can dine in a surprisingly swanky restaurant called L’Incontro, with an imaginative menu and an upscale lounge-bar featuring classic and outlandish crafted cocktails.

The Villa d’Ayala is normally open on weekends, and by appointment on other days, but it’s a good idea to call first to make sure. Villa d’Ayala reservations: (+39) 349 094 6232

Haven't visited yet? Have questions about Villa D'Ayala? Ask them here!