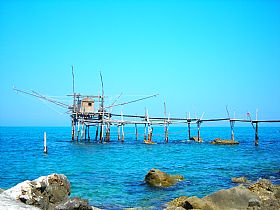 A beautiful coastline dotted with evocative wooden structures perched over the sea makes a lovely outing in Abruzzo. The so-called Costa dei Trabocchi is a 70-kilometer coast from Ortona to San Salvo, with coves and reefs below the hills that end at the Adriatic Sea. The star attraction are the trabocchi, primitive and yet complex working fishing platforms, constructed of wood that sit over the water. The protruding rods and overall form of the historic structures resemble giant wooden crabs, or a noted poet Gabriele D'Annunzio wrote, "colossal spiders". The elevated arms with nets attached to them are raised and lowered using pulleys and ropes, to bring in the catch of the day from the clear water below.

The trabocchi are throw-backs of a long-ago era, in use here since the 15th century, still in operation though in lesser numbers. They are fascinating remnants, and some are open as rustic restaurants. The platforms are on stilts perched over the water, reached by way of a rickety-looking boardwalk suspended from irregular poles and planks. Despite their delicate appearance, the trabocchi have been standing for years, a by-gone way of fishing that is kept alive here on the Abruzzo coast.

Haven't visited yet? Have questions about Trabocchi Coast? Ask them here!

Enjoy the comfort of a home rental in Abruzzo.