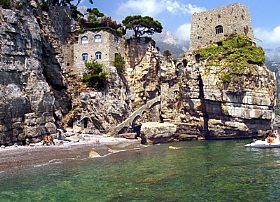 Torre di Clavel Beach is an enchanting little seaside spot below the remains of the 16th century watch tower that was known as Torre Fornillo, until it was renamed for Count Clavel Gilbert, a Swiss nobleman and writer who restored it early in the last century. The tower and its cute stone staircase provide a beautiful backdrop to the beach.

The strip of stone-pebbled beach is bordered by rock formations. It feels like a secluded cove, though there are always little boats bobbing in the water and a concessionaire that rents umbrellas and chairs. It's a truly picturesque setting, well worth a visit.

Haven't visited yet? Have questions about Torre di Clavel Beach? Ask them here!