Tomb of the Giants 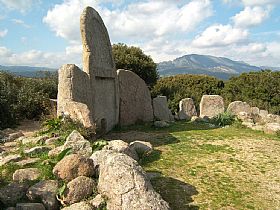 One of Sardinia's most famous archeological sites is the Tomb of the Giants. This megalithic monument near Arzachena is on a low hill, a short walk along a nature path from the parking lot. Grape vines stretch out behind the tombs.

Surrounded by the natural landscape of Sardinian scrub brush and wild flowers, the necropolis is an impressive display of prehistoric art and function. The sacred site dates back to about 2000 BC. There are more than 300 necropolis of the Nuraghe people around the island, but this one, often called Coddu Vecchiu, is the largest such burial chamber. Semicircular shapes played an important ceremonial role for these tribes, and the site is arranged with huge rocks and stones in a crescent shape in the landscape, with the rocks having been carved with rounded tops. The centerpiece is the 100-foot tall carved "entrance" rock that marks the burial chamber behind it. At the base is a semicircular low "doorway," not for entrance to the chamber but a symbolic passageway for the spirits of the dead. An interior corridor led to the tombs. Behind the centerpiece stone you can see the trapezoidal stone shape of the tomb.

It was called Tomb of the Giants (Tomba dei Giganti) for its monumental size; not as a tomb of giants but a giant tomb! This is a fascinating archeological site, unique to Sardinia.

Haven't visited yet? Have questions about Tomb of the Giants? Ask them here!