The Shrine of Pompeii 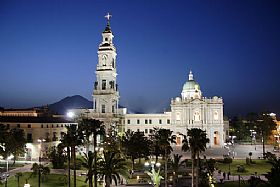 The Shrine of the Blessed Virgin of the Holy Rosary, in "modern" Pompeii (the present-day town that is home to the excavation site) is an international place of pilgrimage.  It is considered the most important Shrine consecrated to Mary in Italy.  4 millions of pilgrims from all over the world visit the Shrine every year.

The Shrine is a place of particular significance in Campania, where the faithful walk 20 miles overnight to complete their pilgrimage to the Basilica, to show their devotion to the Holy Mary and often to thank her for favours received.  The ex-votos that cover the walls of the church are an impressive testimonial of the miracles granted by the Madonna since the church was consecrated in 1891, on May 8th. The ex-votos are small devotional images created as an offering in fulfillment of a vow. Each ex-voto tells a personal story, about the person who miraculously survived a disaster or illness through the divine intervention of Mary. Touching.

The Shrine was built entirely from the donation of the people, thanks to the hard work of Bartolo Longo, who spent his life to build the Basilica and now lies in the Sanctuary.  The church has been enlarged several times during the years, as it was too small, and still is, to contain the number of faithful who would gather there on May 8th and on the first Sunday in October, at noon, to recite the Supplication to the Madonna of Pompeii, written by Bartolo Longo himself.  It is a ceremony that for over a century has been bringing together thousands of pilgrims.

Haven't visited yet? Have questions about The Shrine of Pompeii? Ask them here!

Enjoy the comfort of a home rental in Campania.