The Last Supper by Da Vinci 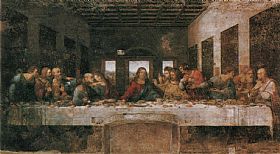 The most famous, most reproduced and most analyzed painting in the world is painted on a wall in a convent in Milan. The great master Leonardo da Vinci was commissioned by Ludovico Sforza, Duke of Milan, to provide a fresco for the refectory dining hall in the convent of Santa Maria delle Grazie. The artist started work in 1494, but ever the innovator, decided to experiment with a inventive technique to bring more vibrancy to the paints. He opted for a dry plaster method rather than the traditional fresco technique of painting quickly onto wet plaster, which "seals" the image onto the wall. The result was indeed vivid, but unfortunately not durable and the painting started flaking not long after it was completed in 1498. The Last Supper has survived thanks to constant care and renovations through the centuries.

It was nearly destroyed during World War II, when the abbey itself was bombed, but sandbags were piled up to protect the precious masterpiece. It is a beloved painting, one of the Renaissance's most famous, revered and respected despite its delicate condition. Its composition is one of the reasons; it is one of the first paintings to depict a real scene as its being played out, by real people. Da Vinci chose to provide a freeze-frame snapshot of the moment after the dinner when Jesus drops the bombshell that one of the disciples will betray him. We as spectators view it two seconds afterwards, as they react to the news, as if we have just walked into the room and happened upon this moment in history. We see the food on the table, the apostles with their mouths agape, hands in the air, stunned and questioning this news, while Judas calmly reaches for another piece of bread, a bit aloof in a shadow, clutching his bag of silver coins.

The composition of the scene is brilliant and Leonardo's perfect portrayal of perspective, with depth and characters appearing "real", but all composed to bring the eye squarely to the face of Jesus. The masterpiece holds great appeal despite its age and decomposition, and is the most reproduced, satirized, caricatured and scrutinized in the world. If you want to see it, you'll need to reserve in advance. The official reservation website offers online bookings, but there are many other guide services and ticket agencies, as well.

The church itself is well worth seeing. It has beautifully painted vaults, and the cloister and dome were provided by the great Bramante. The Last Supper (called Il Cenacolo in Italian) is outside the church in the refectory, located to the left of the church entrance. The church, the convent and the painting are all part of the UNESCO World Heritage Site.

Haven't visited yet? Have questions about The Last Supper by Da Vinci? Ask them here!

Ask our staff about self-catering homes in Milano.