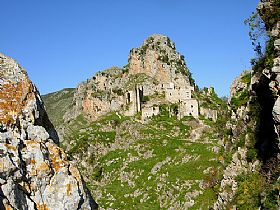 A medieval ghost village nestles on the grey and pink rocks overhanging the valley of the Mingardo river: San Severino di Centola.

The village was abandoned decades ago, when the inhabitants decided that they had too much of living high up on the mountain and moved down in the valley.

In fact, in the Middle Age the village had a fundamental strategic significance, as its position allowed it to control the valley below. And it was indeed to control and defend the territory that a number of watch tower were built, as well as a powerful castle, of which some remains can still be seen today, along with the abandoned homes which give the place a magic atmosphere.

Haven't visited yet? Have questions about San Severino di Centola? Ask them here!