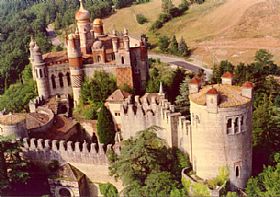 In the rugged countryside near Vergato, this fairytale castle looks lost in place and time. The fantastical castle was conceived and built by Count Cesare Mattei, an eccentric medical practitioner who became internationally known for his alternative medicine treatments. The castle was started in 1850 and was continually added to and modified, creating a labyrinth of rooms, towers and stairways in various styles, including medieval, Moorish, and Germanic. There are onion domes next to crenellations and the count seemed to revel in his fanciful tastes. Ornate arcades, soaring arches, painted vaults and secret courtyards are some of the hallmarks of his unusual castle.

The fantastical melding of styles gives it an other-worldly appearance on its hilltop. The castle was home to the count's medical practice, known as "electrohomeopathy", a method he invented and believed in strongly as a powerful curative practice, which combined the use of herbs with electric bio-energy from plants and homeopathy. He studied biology, anatomy, physiology, pathology and botany and founded his medical movement based on those studies. Illustrious guests from around Europe came seeking cures and stayed in the castle's many rooms. Count Mattei became so well known for his medical practice that he was mentioned in The Brothers Karamazov as a healer.

The castle passed to the count's son, but after World War II the cost of maintenance, repair and upkeep were too high and the castle was abandoned for many years. It was taken over by a foundation in 2005 to be restored and eventually reopened. It currently is still undergoing renovations but there is a museum, the Archivio Museo di Conte Mattei, which is dedicated to the count and his castle. It contains documents and displays on his life and work, and the architecture and construction of the fanciful structure. There is much about the doctor's practice and is the only museum in the world dedicated to electrohomeopathy.

The Rocchetta Mattei is located outside Riola, a "frazione" of Vergato. It is 45 kilometers from Bologna in the Apennine mountains.

Haven't visited yet? Have questions about Rocchetta Mattei? Ask them here!

Have a look at our vacation villas in Vergato.