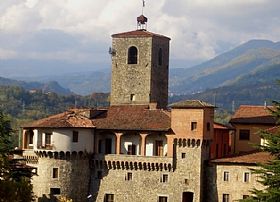 The unmistakable castle of Castelnuovo in Garfagnana is the symbol of the town. The irregular-shaped fortress is posted at the gateway to the village, distinguished by its sturdy stone clock tower and rounded bastions.

Inside the walls of Castelnuovo in Garfagnana, the fortress Este boasts a compact trapezoidal shape with two small courtyards. Built originally around 1000 AD, it was modified and enlarged in the 1200s by Paolo Guinigi. It was later named for the governor Ariosto who oversaw the Garfagnana province from 1522 - 1525.

Originally accessible only by an elevated crossing bridge, it was given some Renaissance detailing with arcades and decor. The fortress was damaged in WWII but renovated exactingly. It hosts events and exhibits, along with a very nice archeology museum that covers the millennia of Garfagnana history, from prehistory to the Liguro-Apuano people, to the Etruscans, and beyond.

Haven't visited yet? Have questions about Rocca Ariostesca? Ask them here!

Rent a holiday home in Castelnuovo di Garfagnana and travel like a local.