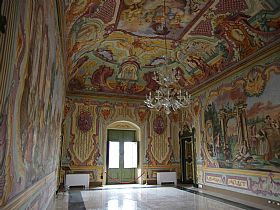 One of Puglia's grandest buildings, the Palazzo Ducale of Martina Franca was built as a regal residence. It was placed over the remains of the Orsini Castle that had been built in the 1300s. Conceived of by the Caracciolo family as a type of royal palace to show their status, its original design was to have 365 rooms. Costs and political changes lessened that design, but it was nonetheless an impressive edifice, and still wows visitors today.

The building was designed by architect Andrea Carducci, and it is said he had input from his friend Gianlorenzo Bernini. It was the cultural and artistic influence of its time for the area, guiding trends as Martina Franca moved from the Middle Ages to the Renaissance and then the Baroque. It bears mostly Renaissance symmetry but with some Baroque flourish and distinctive Salento touches.

The Palazzo Ducale is home to the city's town hall, but also a museum. It is one of the few palaces in Puglia that is still furnished with period pieces, making the salons more appealing and giving a sense of the times as you visit. The halls are frescoed and adorned with artwork.

Haven't visited yet? Have questions about Palazzo Ducale Martina Franca? Ask them here!