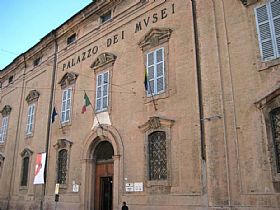 On Piazza Sant'Agostino in Modena is a palace dedicated to the city's best museums. Built in the 1700s as a hospital for the poor and needy, the structure is now called the Museum Palace, housing a complex of several interesting galleries.

The Estense Gallery and Lapidary Museum is an impressive collection handed down from the powerful Este family, and includes priceless works by Bernini, Velasquez, Correggio, El Greco, Veronese, Tintoretto and more. The Lapidary gallery features engravings from the Roman era through the 17th century.

The Civic Museums is actually two in one - the Archeology and Ethnology Museum, with artifacts and displays from the Bronze Age, the Etruscans, and the Celtic and Roman civilizations; and the Art Gallery, that holds a fine collection of paintings, sculptures, textiles and ceramics.

The Estense Library contains rare and historic books, pamphlets and parchments, including beautiful illuminated manuscripts, a Catalan map of the world from the early 1400s, and a map of the Americas according to Columbus' descriptions of his voyages. There is also the famous Borso D'Este Bible, a masterpiece of illumination from the 15th century.

Haven't visited yet? Have questions about Palazzo dei Musei? Ask them here!