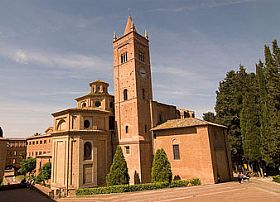 In the midst of the Tuscan countryside near Siena, where the strange formations of the Crete Senese meet the typical Tuscan hills, lies the incredible Abbey of Monte Oliveto Maggiore. The order was established in the early 1300s by a friar who took the name of Bernardo, along with two friends who were from the influential Patrizi and Piccolomini families. They formed a Benedictine monastery, but the monks wore white habits to show their devotion to purity and to the Madonna (and still do today).

The abbey is in the midst of beautiful and tranquil natural surroundings. It is between Siena, Asciano and Buonconvento. You're greeted at the gate by a famous ceramic by Della Robbia. The building is notable for its drawbridge and tower, in keeping with architectural style of the day and for protection during hostile times. It sits along a cypress-lined lane. The late Gothic church is a simple single nave chapel. The main draw are the three courtyards. The Chiostro Grande is especially stunning with its arcades and the portico lined with 36 frescoes, started in 1497 by Luca Signorelli and completed in 1508 by Sodoma. This is a relaxing and beautiful spot.

The monks still pray using Gregorian chants twice a day, which is an uplifting and lovely experience if you're able to time your visit during the morning or afternoon chants.

There is a library that holds 40,000 volumes, restored and preserved by the monks. There is also an historic pharmacy where they continue to produce herbal tinctures, teas and elixirs.

Haven't visited yet? Have questions about Monte Oliveto Maggiore Abbey? Ask them here!

Rent a holiday house in Asciano and travel like a local.