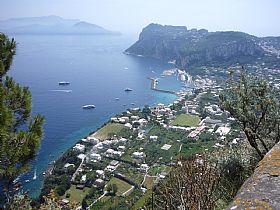 Marina Grande is the main port of call of Capri, and a lovely seaside resort as well. A few metres away from the beach, you'll see the remains of "Palazzo a Mare", which, legend has it, was the favourite residence of Emperor Augustus.

From Marina Grande there are different ways to reach the top part of the town of Capri:

At some point the bus stops nearby the Church of St Costanzo and the cemetery, and both are worth a visit.

If you like walking, it is even possible to walk up a carriage road and the tiny narrow streets intersecting it. You can take dozens of shortcuts, such as: Via Truglio, in Largo Fontana, a few metres before the power plant; Via St Francesco, that starts just after via Don Giobbe Ruocco (the new carriage road). All these streets lead to the medieval entrance of Capri.

Haven't visited yet? Have questions about Marina Grande in Capri? Ask them here!