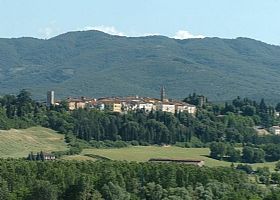 The small charming village of Laterina lies on top of a green hill nearby Arezzo. You'll be amazed by the ancient medieval towers, the lovely church of St Ippolito and Cassiano and the Roman construction of Villa Monsiglio... so nice!

The area around Laterina used to be an Etruscan settlement, as shown by the findings in proximity of Impiano, dating back to the Augustan Age. Its toponym derives from the Latin "later" or "lateris", that means "brick" and marks the huge importance of the ancient clay caves and the brickworks for the local economy.

The news about this charming medieval hamlet can be found around the XI century, during the first process of fortifications of the village that became full of people on the run from the unsafe valleys, excessively exposed to brigands and mercenaries.

The special "castrum" of Laterina is simply mesmerinzing, particularly attractive for its vicinity to the new route that crosses the Valdarno.

Travelling through the ancient via Vecchia Aretina, you'll be surprised by the beautiful views of the valley from the village, immersed into the nature and surmounted by the stunning neo-Gothic bell-tower of the parish church, that lops the lovely roofs.

Approaching the village, surely noticing one of the ancient tobacconist scattered everywhere, you'll find many others witnesses of the local history. Nowadays you can admire large stretches of the walls of the ancient castle, traces of the gateway to via della Rocca, the beautiful door by Ghianderino on the east, the Rocca adorned by wonderful gardens and Porta di Fiorentina.

Under the walls of the castle you'll find large parking spaces and, once parked, from there you'll easily reach Piazza della Repubblica, through a staircase. The church of St Ippolito and Cassiano, rebuilt after the serious damages caused by the earthquake of 1919, overlooks this piazza. The vicariate used to be beside the church and, what now is its ancient building, has preserved throughout the centuries many coats of arms and notable frescoes on the ground floor.

The main street is Corso Italia, that links Porta Fiorentina with the Rocca. Besides some architecturally interesting buildings, along this street you'll find the enchanting oratory of the company of St Biagio.

Do not miss a relaxing walk along the ancient walls, from where to enjoy an amazing panorama of Val d'Arno and, coming from Pratomagno, you'll be able to admire the characteristic landscape formed by Balze Valdarnesi.

This area stands out for particularly suggestive and beautiful geological structures, formed by stratified sands, clays and gravels until 100metres high, set in succession and differently shaped, alternated by deep gorges. These structures, called Balze, are the result of the dismantlement of ancient sediments, caused by both atmospheric agents and human presence.

Haven't visited yet? Have questions about Laterina ? Ask them here! 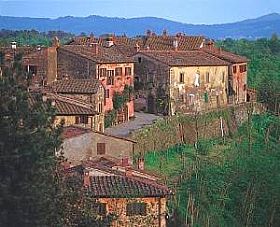 Just minutes from the beautiful city of Arezzo, Castiglion Fibocchi is a hidden gem.