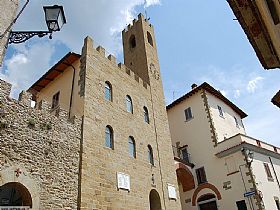 Just minutes from the beautiful city of Arezzo, Castiglion Fibocchi is a hidden gem. Occupying the famed Tuscan hills, it is small, tidy, attractive town with vestiges of its noble past intact. The history of the town goes back to the Roman Empire but it truly developed after 1000 AD when it became the possession of the Guidi Counts. They built a fortified castle and protective walls and the town sprung up more energetically inside. It fell under the Florentine Republic in 1384, then was passed around among various barons and nobles, who each added a palazzo or piazza to further enrich the town.

The beckoning alleyways have archways and are lined with pretty stone buildings, interspersed with peaceful piazzas. The Municipal Palace gives a fine focal point, with its crenellations and clock tower. The spare style of the church of Saints Pietro and Ilario houses fine frescoes. The 12th century gateway of Porta Fredda still allows visitors to enter the town beneath its arch. There are remnants of the stone defensive walls intact, as well. Nearby, the tiny rural hamlet of Gello Biscardo is perfectly preserved and is worth a wander.

Castiglion Fibocchi throws a cantankerous Carnevale party, rolling out the costumes and fun as it has for centuries. Their carnevale celebrations were written about as far back as 1174. Street performers, food stands, concerts and entertainment are capped off with fireworks.

With towns like Arezzo and Cortona so close by, Castiglion is in a good position for touring Tuscany. Florence, Siena and Chianti are all in easy reach, as well.

Haven't visited yet? Have questions about Castiglion Fibocchi? Ask them here!