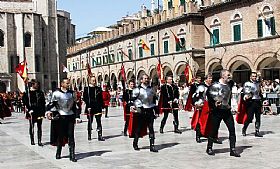 A rousing horse race event that involves long wooden jousts, an athletic flag-throwing competition, and a parade that involves hundreds of citizens in opulent costumes is what you'll find at La Quintana in Ascoli Piceno. This medieval event has taken place in the city of travertine for centuries, with traditions that date back directly to the Middle Ages and the military exercises that started the competitions. It pits the sestieri (six districts) against each other in different challenges, including archery, flag-throwing, and more. It culminates with the Joust (la giostra), where knights on horseback must maneuver on a tight figure-eight shaped track and, with precision, launch a heavy joust into the target, called The Moor. The winner takes home the Palio, a hand-painted prized banner, that will be displayed in the sestiere's center.

The Corteo Storico is a sumptuous parade of each sestiere's chosen representatives, all adorned in elaborate costumes recreated faithfully to the era's styles. The tailors who make them painstakingly recreate the details by studying the medieval paintings around the city. Knights in armour, dames in gowns, and bands of drummers and trumpeters lead the amazing procession to the arena for the joust. It is a beautiful affair, and yet relatively unknown (and thus uncrowded). La Quinana has much historical symbolism tied into it - such as the offering of the candles to the church, the blessing of the knights and horses, and songs that the trumpets play, each sestiere's tune is distinct.

Events for La Quintana take place throughout July and August. See the Quintana Website for details, schedules, and tickets.

Haven't visited yet? Have questions about La Quintana Palio? Ask them here!

Have a look at our apartment rentals in Marche.