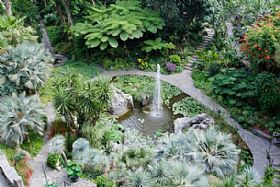 The extensive garden known as La Mortella is a lush and thriving oasis on the island of Ischia. Located outside the town of Forio, it was set up by Lady Walton, the wife of English composer Sir William Walton, in what was a 50-year labor of love. She consulted with English landscape architect Russell Page but also followed her own whimsy and creativity in the design and plantings. The result is an incredible garden that has been named one of Italy's most beautiful. The garden incorporates the dramatic volcanic rock indigenous to Ischia into the design, with a lower garden known as The Valley and another that winds up the slope known as The Hill, with terraced walls. The different zones and areas are linked by paths and steps, and the upper garden has beautiful views of the bay. Sprinkled along the pathways are fountains, steams and ponds.

Exotic plants are found here, like papyrus, lotus and water lilies, and there are tropical green houses to hold rare varieties not normally found in Ischia. A Greek Theater was built into the hill, taking advantage of the natural slope, where musical evenings highlight the compositions of Sir William Walton, a very accomplished classical composer. He composed symphonies, concertos and some film scores, and Lady Walton keeps his music and memory alive with concerts and musical workshops for local aspiring musicians.

Haven't visited yet? Have questions about La Mortella Gardens? Ask them here!

Rent a holiday house in Capri and Ischia and travel like a local.