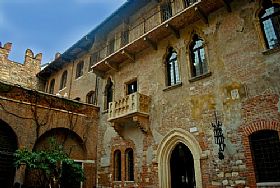 La Casa di Giulietta is a major attraction in Verona, the house of one of literature's most popular fictional characters. The tale of Romeo and Juliet takes place in fair Verona, and while it became known all over the world thanks to William Shakespeare, the first rendition of the story was written by an Italian - Luigi da Porto, in 1530. The classic tale of two rival families is true - the Capuletti and Montecchi families did exist and feud in Verona. The house that is said to be Juliet's belonged to the dell'Capello family, so became the natural backdrop for literature buffs wanting a living glimpse of the story.

The house and its accompany balcony are located in a courtyard, tucked away at the end of a tunnel-like gallery where romantics and love-lorn souls leave notes to the heroine. These notes became the basis for a film, Letters to Juliet. Girls and couples pose on the balcony for photos, and rub the breast on the bronze statue of Juliet in the courtyard for luck. The courtyard is open to the public, while the house is a museum with period antiques and paintings that all relate to the play, and is open for a fee. It is also possible to arrange to be married here; civil unions are conducted on Mondays when the house is closed to the public.

Other points of interest for Romeo and Juliet fans include the House of Romeo, which belonged to the Montecchi family. It's not open, but there is a restaurant on the ground floor where you can dine and take in the atmosphere. The church of San Francesco al Corso is said to the be locale where Friar Lawrence married the mythical couple and where the crypt below is labeled as Juliet's, and the scene where the couple tragically died.

Haven't visited yet? Have questions about Juliet's House? Ask them here!