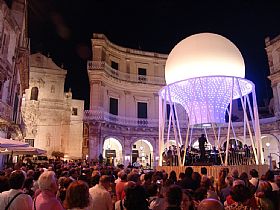 An annual extravaganza for opera and symphony lovers takes place in Martina Franca 's most beautiful venues. The Festival della Valle d'Itria has been a summer ritual since 1975, bringing various versions of operatic theater to the Puglian region in both classical and original forms.

The festival is held from mid-July through the first part of August and is staged in different settings - including the Palazzo Ducale, the Chistro di Palazzo San Martino, the Teatro Paolo Grassi, along with area masserias (old fortified farms) and the town's churches. It is a beautifulevent and a highlight of summer cultural entertainment here.

Haven't visited yet? Have questions about Festival della Valle d'Itria? Ask them here!