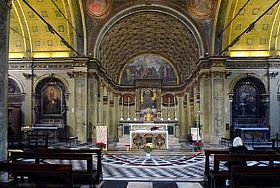 Walking into this church with its barrel-vaulted nave lined with columns and your eye is immediately drawn to the altar set in a spacious alcove. But walk closer and you'll see it's a very clever and beautiful optical illusion created by the Renaissance master Donato Bramante. It is a masterpiece of tromp l'oeil, probably the first of this scale.

The church of San Satiro was originally built in 876 on the site of the martyr's house. A church dedicated to Mary was ordered built on the site to contain a miraculous icon of the Virgin Mary that legend holds was stabbed by a vandal and it bled real blood. This church, built in 1476-1482 had the challenge of a small piece of property. The primary architect, who also designed the facade was Giovanni Amadeo. It was Bramante, though, that gave it the special effects that are still being marveled at: the dome at the transept, a classic Bramante feature, and its illusionary apse, an amazing piece of artwork displaying proportion and realism that hadn't been seen before -and have rarely been seen since.

The space appears to occupy 9 meters while it actually is contained in a space just 95 centimeters deep! It must be seen!

While you're here, don't miss the Cappella della Pieta' with its 15th century terra cotta sculpture and the famous icon that brought on the construction of this chapel, behind the altar. The original frescoes that decorated the walls of the nave painted by Borgognone are now in the Brera Gallery.

Haven't visited yet? Have questions about Church of Santa Maria presso San Satiro? Ask them here!

Enjoy the comfort of a home rental in Milano.