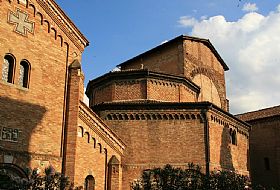 One of Bologna's most interesting sights is the series of churches that make up the complex of Santo Stefano. Also referred to as Santa Gerusalemme (Holy Jerusalem) or Sette Chiese (Seven Churches), this piazza is packed with the differing styles and interesting features of four churches that are interconnected. The first was built by St. Petronius, the bishop of Bologna in the 5th century, and the patron saint of the city today. It is thought that he ordered the construction of the first church, the Holy Sepulchre, in the fifth century, to be built over the temple of Isis. The round plan has a high unadorned brick cupola, beautiful for its simplicity. The church's center is encircled by 12 black marble columns said to have been brought from northern Africa.

Artwork and a fresco cycle depicting the martyrdom of St. Stephen are the hallmarks of the Crocifisso church, while the spare church dedicated to saints Vitale and Agricola boast columns with various capitals from Roman and Byzantine origin, along with intricate mosaic floors. A courtyard bears a basin called "Pilate's fountain" while a Benedictine cloister is a peaceful place. There is a small museum with displays and religious artwork to enjoy as part of the complex.

Haven't visited yet? Have questions about Church Complex of Santo Stefano? Ask them here!