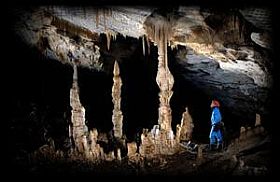 The caves of Castelcivita are a fascinating network of caverns in the Cilento National Park. They were discovered in 1920, and opened for explorations in 1929 by the Touring Club and the Italian Speleology Institute. Interrupted by WWII, the exploration and preparation to open the caverns resumed in the post-war period. With a lighting system in in 1962, the Grotte di Castelcivita' was opened to the general public to enthusiastic response, lending more budgetary assistance for improvements and access.

Today, the caverns provide a beautiful underworld experience with dramatic ambient lighting along the 1-mile (1.7 km) pathway that allows you to view the stalactites and stalagmites, and other geological formations.

You'll pass through a succession of chambers, shafts, passages and galleries that intersect, thanks to the erosion from an underground waterway.

Formations include organ pipes, a cascata, the spaghetti, and a pool of diamonds (which your guide will explain to you during the visit.)

Closed in winter months, except by advance reservation.

Haven't visited yet? Have questions about Caves of Castelcivita? Ask them here!