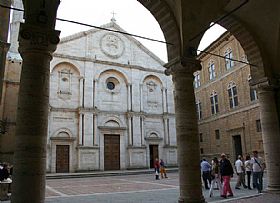 Pienza is a lovely town in southern Tuscany, near Siena. It was named a UNESCO World Heritage Site for being the first town to implement the Renaissance concept of urban design to an entire city, planned as "an ideal town" which was later used in other areas of Tuscany and Italy. The piazza, the palaces and the churches make it a beautiful place to visit.

The main piazza of Pienza is beautifully overlooked by the impressive Cathedral of Santa Maria Assunta, which melds Renaissance and Gothic elements. The monumental travertine facade was designed by Rossellino and it is vertically divided into three sections by large pillars flanked by two rows of columns. At the bottom there are three portals, while the upper part is dominated by the emblem of the powerful Piccolomini family. The exterior walls are highlighted with large Gothic windows.

The interior is Gothic with souring vaults and heavy columns. There is a pipe organ that compliments the services of which the residents are rightly proud. A visit to Pienza is sure to impart a sense of the ordered space and sense of symmetry that the Renaissance period is famous for, while this church also pays homage to the area's Medieval past as well.

Haven't visited yet? Have questions about Cathedral of St Maria Assunta? Ask them here!