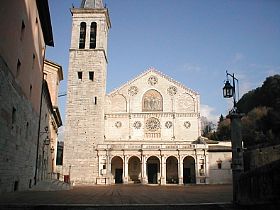 Spoleto's Piazza del Duomo looks like an opera set. A sloping staircase leads down into the square that is enclosed by buildings, with the stunning Duomo as its primary backdrop. No wonder it's the scene of many of the events for the Spoleto Festival dei Due Mondi (the Two Worlds Festival). The cathedral is dedicated to Santa Maria Assunta and has some stellar artwork inside.

The 12th century church was built in Romanesque style with more flourish than normal. There are eight rose windows adorning the facade, and is faced by a Renaissance-style portico along the front. The bell tower was constructed with stones scavenged from an ancient Roman temple. The interior was white-washed in high Baroque in the 17th century, but the important masterpieces remained untouched. The most important is the fabulous fresco cycle in the apse by Fra Lippo Lippi depicting the Life of the Virgin. There are four scenes; the vibrant and colorful Coronation of the Virgin is a contrast to the more subdued tones of the others. In the Dormition of the Virgin, Lippi painted himself and his son into the scene. Lippi died just after completing the frescoes and his tomb is in this church.

There is also a painting by Pinturicchio, along with another Madonna and Child by Anniballe Carracci. Don't miss the sacristy where there is a signed letter by St. Francis of Assisi, one of only two such documents to survive the centuries.

Haven't visited yet? Have questions about Cathedral of Santa Maria Assunta? Ask them here!