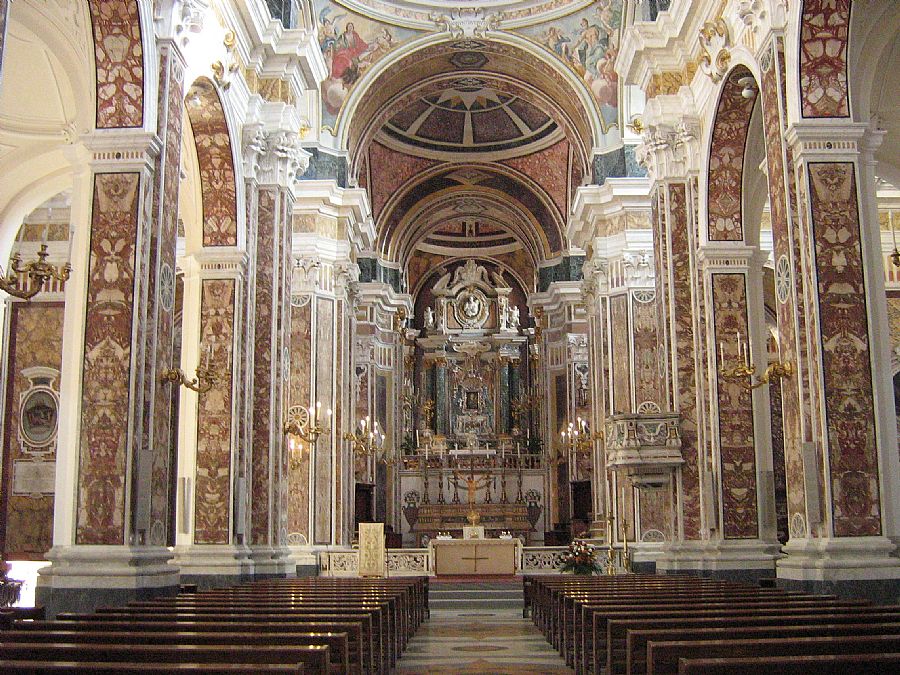 In the old town center of Monopoli, the cathedral stands out as an adorned gem amidst the homes and palazzi of the narrow streets. Located in a "largo" piazza, the churches facade rises above the other buildings, flanked by its tall bell tower.

The original church was built in the 11th century on the site of a decayed Roman temple. It was constructed in Romanesque style but never fully completed as it lacked the roof. Local tradition holds that on December 16, 1117 a raft drifted ashore at the harbour with an icon of the Madonna on it, a symbol that the church should be completed. The beams and wood of the raft were used in the completion of the church, which was dedicated to the icon that came to be called the Madonna della Madia. It was finally consecrated in 1442. In 1686 the original bell tower collapsed, killing 40 people; a new one was constructed in 1693. A church itself was rebuilt starting in 1742 and completed in 1772 in neoclassical style that also retained some elements of Romanesque along with the Puglia flair for Baroque.

The cathedral is a feast for the eyes, from its stone swirls adorning the facade to the interior that looks like a colorful candy store with its vibrant marbles and frescoes. You'll find the treasured icon of the Madonna della Madia, but also many other beautiful canvases and sculptures. Don't miss the sacristy with its masterpieces, as it is often overlooked.

The feast of the Madonna della Madia is celebrated twice a year, re-enacting the landing the raft and transporting the treasured icon through the streets and on a boat, blessing the fishing fleet and the townspeople. It takes place over the December commemoration of the icon's arrival (December 12-17) and in mid-August.

Haven't visited yet? Have questions about Cathedral of Monopoli? Ask them here!