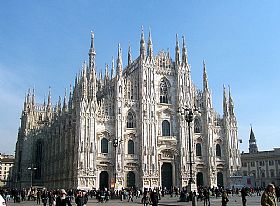 The most distinct landmark in Milan is definitely its gleaming cathedral, placed smack center in the city. Some describe its facade like "spun sugar" or marble-made lacework, while others say it resembles an intricate white sand castle. Mark Twain effused its glories in his book Innocents Abroad, saying, "What a wonder it is! A very world of solid weight, and yet it seems ...a delusion of frostwork that might vanish with a breath!)

It is hard to gaze at it and not be impressed. The exuberant Gothic structure is a highly decorated wonder, festooned with spires and statues. The bronze doors lead you into the vast and airy interior with corridors of columns forming several naves. It is entirely impressive. The highlight is outside, though, on the roof. Climb the steps or take the elevator (both well worth the fee) to stand in awe among the forest of pinnacles that adorn the roofline; it's like being in an ice sculpture.

The Duomo of Milan was commissioned in 1385, but set a record for the time it took to build - more than five centuries! It wasn't finished until 1813 (and even then there were still some things to complete!) It was consecrated in 1418 with just the nave, but work continued through the centuries with dozens of different designers, architects, and artists having a hand in the finished cathedral. The final effect is glorious, though, unusually ornate for Gothic style and beautifully airy with a mix of Gothic, Baroque and neoclassic decorations inside.

It stands in the very heart of Milano, the city's pride and its most prominent landmark.

Haven't visited yet? Have questions about Cathedral of Milan? Ask them here!