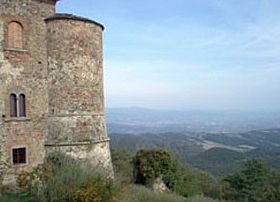 The castle was built around 1170, when the nobles of Montauto were mentioned for the first time. The Etruscans settled in Montauto in 967 in order to exploit the rich copper mines surrounding the area. It was later seat of a Roman-Byzantine sighting tower and feud of Geoffrey, son of Ildebrando, to whom the holy Roman emperor Otto I confirmed those properties in the Upper Tiber Valley.

The castle used to be the most powerful of that zone, with three boundary walls and an imposing central body with donjon. It was so important because of the strategic position: located up to 700 metres above the sea level; two sides overlooking the cliff of the torrent Sovara, one protected by the mountain's rocks and the façade facing the only way to access the castle, reinforces by imposing defences.

The castle was the favourite destination of St Francis of Assisi, during his transfers from Verna to the chapel of Monauto (1503) where it is still preserved one of his frocks. In 1503 the Florentine took the castle by fraud and deprived it of the precious treasures. The fortress was almost totally destroyed and rebuilt during the Renaissance, as witnessed by the beautiful corner tower facing the entrance, attributed to the great architect Francesco di Giorgio Martini. The stone double lancet windows and the terraces have been made a while later, when the castle became a country house. Beside the above mentioned chapel Mountauto, there is a larger church with sculpted portal and fortified external front. The whole complex is still owned by the family of Counts Barbolani da Montauto and, unfortunately, not freely visitable.

Close to the castle you will find two fortified private villas: the sixteenth-century Barbolana and the Castle of Galbino, born over a pre-existing medieval fortalice.

Montauto rises on the watershed between Casentino and Upper Tiber Valley. It is reachable from Arezzo just following the national road SS71 Umbro-Casentinese until the exit to Anghiari. After about eight kilometres, near Valico della Scheggia, you will find a signal that will get you into a dirt road on the left which goes up to the castle.

Haven't visited yet? Have questions about Castle of Montauto? Ask them here!