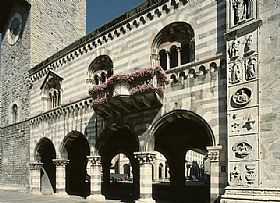 The Broletto is an ancient seat of the Palazzo Comunale di Como, it is located in Via Vittorio Emanuele II.

The term "broletto" comes from the medieval Latin "brolo", meaning the field: a vast land where the people could meet up so, in a wider sense, the place chosen for town meetings, in other words the Town Hall. Later on the Broletto was used as a theatre and communal archive, is now used for exhibitions and public events.

The building boasts a fascinating Gothic façade with polychrome marbles, coming from the quarries of Lake Como, flanked by civic tower made of rusticated stone. As written on the plaque that is on the main façade, just under the left window, the building was erected in 1215, at the behest of Bonardo from Cadazzo, mayor of Como.

Both palace and tower were built in honour of St Abbondio, patron saint of the city of Como, near the ancient cathedral that recent studies consider as a double cathedral complex, consisting of the basilicas of St Maria and St Giacomo. At the beginning the structure was larger and got evident Romanesque-Gothic characteristics, but in the second half of the fifteenth century it was mutilated (possibly to allow an enlargement of the cathedral) and turned up to take a Gothic-Renaissance imprint. Overall, the building presents the typical elements of the period of transition between Romanesque and Gothic, enlivened by a polychrome of the various stones used.

Haven't visited yet? Have questions about Broletto? Ask them here!

Enjoy the comfort of a home rental in Lake Como.