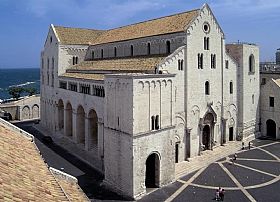 One of the world's best-known saints is also one of the least-known in terms of facts. San Nicola, or St. Nicholas, is steeped in legend and Santa Claus tales, but he was an important figure in church history, and his remains are in a basilica in Bari. He is often referred to as "San Nicola of Bari" but he was actually born in Myra in the 3rd century, in what was then part of the Greek world, later part of Turkey. His wealthy parents died in an epidemic, and Nicola used his inheritance to assist the needy, sick and suffering. He became Bishop of Myra, and was renowned for his generosity and his love of children. Nicholas was imprisoned by the Emporer Diocletian, a fervent persecutor of Christians. he died in Myra is 343 AD.

That might have been the end of his renown, but his acts of generosity were remembered and spread far and wide, and his tomb became a pilgrimage spot. In 1087, wanting to "liberate" St. Nicholas from the strife and wars of the region, sailors from Bari succeeded in capturing his bones and transporting them to their hometown. A basilica was constructed and his remains were placed in the crypt. It became a popular place for pilgrims, so that today he is known as St. Nicholas of Bari.

The basilica was built in what was to become the defining version of Romanesque style in Puglia that took hold all over the region for a couple hundred years afterwards. It squarely straddles two piazzas in the historic center, putting it right in the middle of Old Bari's civic life. It's just a few steps from the seafront, which is appropriate because St. Nicholas is also the patron saint of sailors. The basilica is constructed of white limestone blocks and the solid structure with minimal decoration appears severe until the soaring interior crossed with arches and festooned with a gilded ceiling gives it a lighter, welcoming impression. The vault where the saint's remains are entombed is a marble forest of columns capped with brick cross vaults and is very atmospheric.

The sacristry holds precious items gifted to the church from popes, bishops and rules through the centuries. The crowd of international visitors testify to the enduring popularity of this humble and generous saint. His feast day is celebrated to mark the day of his death, December 6. Bari is a good place to be for those festivities as the town remembers their patron with parades and festivities.

Haven't visited yet? Have questions about Basilica of St Nicola? Ask them here!

Have a look at our holiday homes in Puglia.