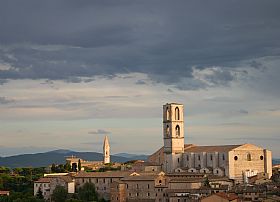 The most imposing church in Perugia is also the most visible, thanks to its high-rise bell tower that stands out as a landmark.The shaggy rough brick facade was never finished, despite the century and a half of construction that built the church. It was originally constructed in Gothic style but underwent some renovations, most notably in 1632 by Maderno that redid the interior in the more luminous Baroque style that was sweeping the country.

The renovations left some of the church's artistic treasures intact, though. The side chapels hold some real gems. On the left are two chapels with old original frescoes (some have deteriorated with time, unfortunately). On the right is the chapel with the intricately carved Gothic sculptural tomb of Pope Benedict XI, a beautiful work. The glorious stained glass windows remain, streaming luminous rays of colored light into the church. The gleaming wood choir is also lovely.

The original complex of San Domenico was a large Dominican monastery. There are two cloisters with arcades and loggias in Renaissance style, the former palazzo residence, and a library. The ex-covento section now houses the very impressive Museo Archeologico dell'Umbria, a prestigious archeology museum for the region.

Haven't visited yet? Have questions about Basilica of St Domenico? Ask them here!

Rent a holiday home in Perugia and travel like a local.