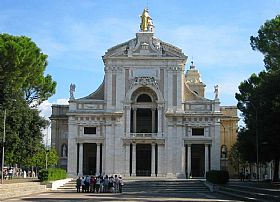 When Saint Francis of Assisi wanted a chapel to pray and worship, he was given a long-abandoned stone church from the Benedictines. It sat amidst a forest down on the plain below town. He and his friends took about restoring it themselves, rebuilding it stone by stone. It was in this humble church that Francis formed the order of the Friars Minor, and where he returned often throughout the years as his home base. It was here that St. Clare was commissioned for her monastic life and began the order of the Poor Clares in 1211.

St. Francis maintained his austere cave-like living quarters in this chapel, known as Porziuncola (little portion). He prayed and requested that any believer who repented of his sins and entered that chapel be pardoned; he received a vision granting his request, and the episode is depicted in frescoes behind the altar. St. Francis died here on October 3, 1226.

Pilgrims to the small, rustic chapel became so numerous that something needed to be done, not only to receive them but to protect the chapel from damage. It's estimated that there were 100,000 visitors in 1582! A basilica was begun in 1569 and completed just over 100 years later. The Baroque basilica is one of the largest churches in Christendom - 126 meters long, 65 meters wide and 75 meters high at the base of the dome. The colossal church is full of light and decorated, but the focus is always drawn to the Porziuncola chapel, which rests directly below the soaring dome.

The humble chapel remains intact, and visitors can see the cell where the simple and peaceful saint passed away. It is a highly spiritual place; many people say they feel a warmth and peace here, even those who aren't at all religious.

There is a rose garden outside, all that remains of what had been woods around the chapel in St. Francis's day. A museum displays relics, gifts and artifacts, and there is a charming display of nativity scenes that were sent to the church from all over the world, gifts to the saint to started the nativity tradition.

After visiting the Basilica of St. Francis up in the town of Assisi, you can follow a walking path down to this church, where St. Francis, lived, prayed, and died.

Haven't visited yet? Have questions about Basilica of Santa Maria degli Angeli? Ask them here!

Rent a holiday house in Assisi and travel like a local.