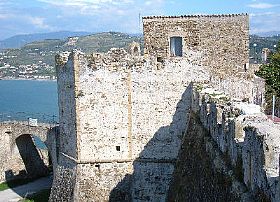 The castle of Agropoli stands on the promontory, crowning the Old Town of Agropoli. Its ramparts and tower provide a defining character to Agropoli. Built as a fortress and watch tower, it faced the sea and its walls extended down the slope. A wide, deep moat surrounded it for added protection, making it look like a children's book castle. It still gives an aura of power and history. Wander the characteristic narrow lanes of the medieval center of Agropoli and arrive at the piazza in front of the castle, with sweeping views of the sea.

There has been a fortress here since Greek-Byzantine times, when a seafront lookout was constructed. It was amplified by the Normans and reinforced by the Spanish. The castello still bears the appearance bestowed on it by Aragons when they restructured it in the 15th century. They expanded its original triangular-shaped plant. The castle's courtyard is now used as a garden and outdoor theater; it rests directly on the rock incorporated into the walls of the castle. On the northern side is the "Hall of the French", so-named by the troops during the Napoleonic period.

The city and private organizations host concerts and events in the castle's courtyard. If you're lucky, you'll be able to listen to music or taste local products here during your visit.

Haven't visited yet? Have questions about Aragonese Castle? Ask them here!

Have you seen our self-catering apartments in Agropoli?