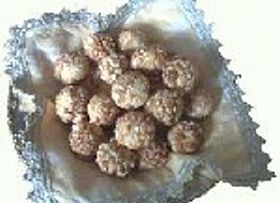 Typical Christmas recipe in Bettona, also called "zuccarini" according to the local dialect.

Mix flour with sugar and pour the mixture onto your working surface, form a well in the middle of the mound of flour. Add the brewer's yeast previously melted into tepid water, mix with milk and olive oil. Work the mixture till you have a fairly firm dough. Place it into a large bowl and let it rise for a couple of hours at a warm temperature. When the 120 minutes are up, take out the dough and mix with raisins and aniseeds. Grease a large baking sheet; curl up the "zuccherini" and place them in. Sprinkle some sugar and let them rise for two hours more. Pre-heat oven to 180 degrees C and bake until golden brown.

Let them cool and buon appetito!

NB: zuccarini may be stored in a dry and cool place for one month and over.

Haven't visited yet? Have questions about Zuccherini di Bettona? Ask them here!

Rent a holiday home in Umbria and travel like a local.