The Two Worlds Festival of Spoleto 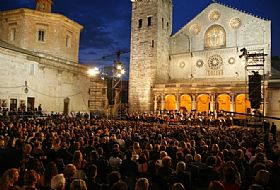 A major cultural event that brings together two worlds takes place every summer in Spoleto, Umbria. The festival was the brainchild of composer Gian Carlo Menotti who launched it in 1958 to unite the Old World and New World in the arena of the arts. The focus of the festival is to contrast and celebrate the differences and styles of North America and Europe through music, dance, drama, and visual arts. It has a sister festival that is held in Charleston, South Carolina.

Ballet, opera, painting, contemporary art, and lectures are some of the offerings you'll find there. It has attracted such prominent people as Baryshnikov, Joaquin Cortes, Twyla Tharp and Pavarotti. It is an annual celebration that attracts thousands to the ancient town, which is itself a beautiful backdrop and hospitable stage. It is a 17-day event worth visiting if you are in Umbria at the end of June and beginning of July.

Haven't visited yet? Have questions about The Two Worlds Festival of Spoleto? Ask them here!

Have a look at our vacation villas in Spoleto.