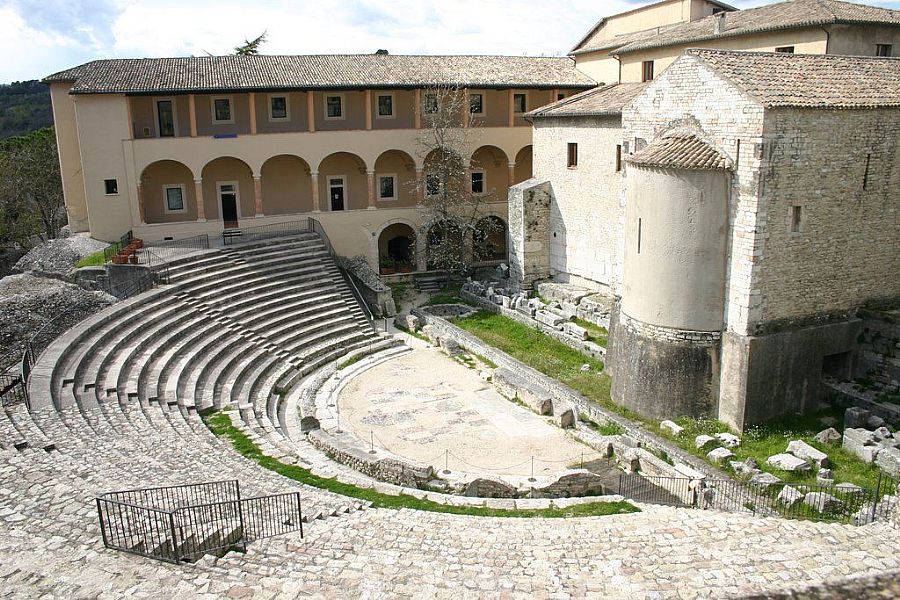 Spoleto has a wealth of ancient sites strewn throughout the city, remains of the Roman city of Spoletium. The ancient forum was excavated in the area of Piazza del Mercato, revealing mosaics, and pavings 1.5 meters below the current street level. They found a 1st century AD house with an atrium, partially below the current Palazzo Comunale dating to the time of August, with the floorplan intact.

The most famous Roman site, though, is the semicircular theater, visible from Piazza della Liberta'. The Archeology Museum stands next to it in the ex-Convent of Sant'Agata, a medieval structure which was built partially over the ancient site and using materials scavaged from the theater. It contains 3,500 years of history on its four floors. You'll find artifacts found in the theater, including busts and inscriptions, along with pieces found at the Roman necropolis, two Umbro necropoli, and items from the Middle Ages. There are bronzes, ceramics, carved bone funerary objects, ancient oil lamps, and Umbro jewelry. The Lex Spoletina is housed here, a third-century inscription that was found at the entry to a forest that was considered sacred, laying out what is considered the first "forest laws" about what is prohibited within the sacred woods, that nothing can be cut or extracted or in any way damaged.

The entry fee for the museum includes the visit to the Roman Theater archeological site. The theater is used for some smaller venue events during the Spoleto Two Worlds Festival.

Haven't visited yet? Have questions about Roman Theater and Archeology Museum? Ask them here!